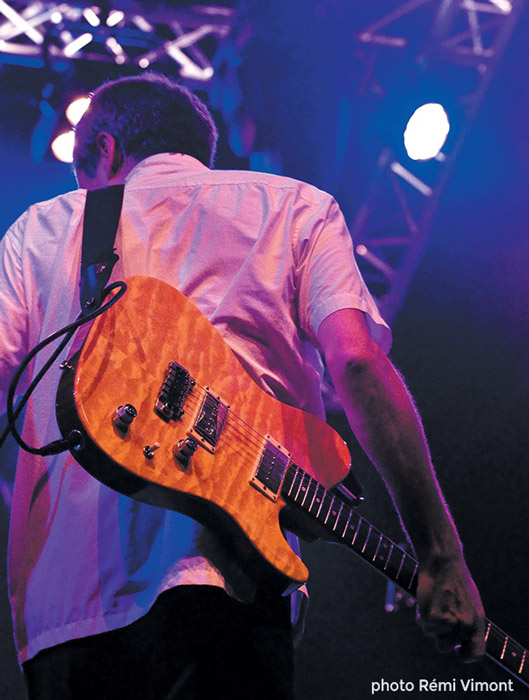 Originally with a passion for drawing, Pierrejean Gaucher did not tackle the guitar until around the age of 15, taking classes with Alain Vérité, Yves Jaget, Eric Boell and Philippe Petit. After graduating from high school, he devoted himself entirely to music and studied for a few months at the Berklee School in Boston. Back in France, he devoted himself to his group Abus Dangereux. Becoming simply ‘Abus’ in 1986, this pioneering development of the French jazz scene has totalled 8 albums and more than 400 concerts in France and abroad. Many illustrious musicians have crossed paths with this group: Randy Brecker, Stéphane Belmondo, Bobby Rangell, Olivier Hutman, Etienne M’Bappé… Incredibly devoted to writing for Abus, he composed the first theme tune for the TV show Jazz 6 in 1987.

In 1992, he created the New Trio with drummer André Charlier and bassist Daniel Yvinec. In 1994, this trio became a quintet that paid tribute to Frank Zappa who had disappeared a year earlier. This project, named Zappe Zappa, brings together an audience that reaches far beyond jazz. Two CDs from this creation were released in 1998 and 2002. In 2000, he set up a new quartet: the Phileas Band. The year 2002, also saw a duet with the guitarist Christophe Godin, the 2G. In 2005, he inaugurated his new musical adventure Fabulatorz, dedicated to the Fables of la Fontaine, and which will perform in the Alliances françaises of China, Canada and the Eastern European countries.

While working more and more on the relationship between music and literature (duet with Frédérique Bruyas), he assembled a trio with cello and drums in 2009, entitled Melody Makers. This group, which offers its own version of British pop, has released two CDs to date. At the same time, he focuses more and more on artistic and teaching residencies with conservatories for which he writes and arranges his music (and other repertoires) for large orchestras of students and teachers (symphonic, harmonies, etc.).

Resident in La Drôme since 2010, he has many meetings with artists of various disciplines (sculpture, ceramics, painting, etc.) in creating sound installations for exhibitions (the sound of bowls, howling sparks, etc.)

He has been active for a long time in the educational field: head of the guitar department and computer-assisted music at the Centre des Musiques Didier Lockwood from 2000 to 2009. Regular speaker at the Music Academy of Nancy since 1990, and hosts guitar courses in various schools or festivals. He is the author of educational books and videos, notably for the Outre Mesure editions.

From the beginning of his musical career, he has collaborated in various music magazines (editor for Jazz-Hot in the 80s), then Jazzmag, Jazzman, Muziq etc.) He continues to write today, while sometimes participating in programmes on France Musique.